Who am I to try to teach you something?

Well, I am just like you – a photographer with a passion for creating beautiful art for my clients.

About the business side of it all:

– Started Pinkstudio back in December 2007 (and had no clue on how to run a company)
– From 2007-2013: Ran everything from home, with the “shoot and burn” model.
– Moved into my studio in late 2014.
– 2014: (a month or two after moving into the new studio) Epiphany time! I realised that even if I was doing OK compared to most other photographers, I was working my ass off for less than minimum wage.  I would make more at a full-time McJob, and have more time with my family. So I decided to make it or break it. Either I did this, or I closed it down.
2014-until today: Have read, listened, watched just about anything about making money as a photographer.
2015: I made more than 100% more than in 2014.
2016: I am making more than in 2015 – and with a bigger profit-percentage.
2017: More than 300% above before the switch. Moved to a high street studio. Did an IPS mastermind class on weddings – did talks at The Photography Show in Birmingham. Made a Danish workshop.
2018: Workshop in Holland, more talks in Birmingham, some mentoring at Photokina and another Danish workshop. Broke the curve and invested too much – had my first big failure story as a business owner (Failure is also a part of my workshops – no sugar coating or perfect life)
2019: Too early to say – but just returned from Birmingham, will be doing talks at Professional Imaging in Holland – and a workshop in Holland as well in May. 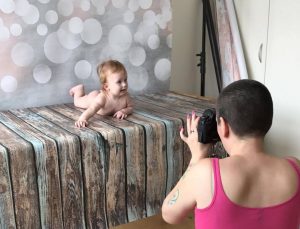 About me as a photographer:

– Weddings are my passion, I love love love weddings (I married my husband 3 times, so far – planning the fourth one in 2019).
– I have done a little of everything, but my main focus has always been weddings and babies.
– I would describe my style as simple, bright with a twist of a documentary style.
– High service, making sure my clients have a great experience from when they walk in the door until they leave with their finished products.

– Married to John, who is my biggest cheerleader – supporting me and my business all the way.
– Two times a mother – Louise from ’96 and Lasse from ’01 – (many hours of free child-labour right there 😉
– Live in Odense, Denmark. Half Danish, Half Scottish.
– Adopted shelter cats: Zeus (from 2007) and Castor (from 2017)